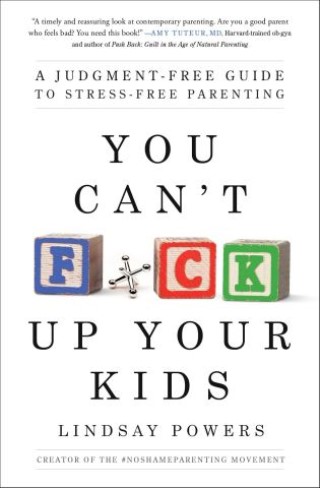 You Can't F*ck Up Your Kids

A Judgment-Free Guide to Stress-Free Parenting

Cribsheet meets The Sh!t No One Tells You in this no-holds-barred, judgment-free parenting guide that sets the record straight on every hot-button parenting topic by longtime journalist and founder of the viral #NoShameParenting movement.

What if you could do more for your kids, by doing a whole lot less?

Parenting today has become a competitive sport, and it seems that everyone is losing. From the very moment that little line turns blue, parents-to-be find themselves in a brave new world where every decision they make is fraught, every action they take is judged, and everything they do seems to be the wrong thing.

Formula feed? Breast is best.
Breastfeed in public? That’s indecent.
Cry it out? You’re causing permanent harm to your child.
Don’t sleep train? Your child will never learn to sleep on his or her own.
Stay home? You’re setting a bad example for your kids.
Go back to work? Don’t you love your kids more than your job?

Lindsay Powers—former editor-in-chief of Yahoo! Parenting, creator of the #NoShameParenting movement, and mom of two—is here to help parents everywhere breathe a collective sigh of relief. This laugh-out-loud funny, accessible, and reassuring book sets the record straight on all of the insane conflicts that parents face—from having a glass of wine while pregnant to sleep training, childcare, feeding, and even sex after baby.

Drawing on the latest research and delivered in a relatable, comforting voice, You Can’t F*ck Up Your Kids demonstrates that it is possible to take the stress out of parenting and sit back and enjoy the ride.

Lindsay Powers: Lindsay Powers is a long-time journalist whose work has appeared in The Washington Post, the New York Post, Us Weekly, The Hollywood Reporter, Cosmopolitan, CBS This Morning, Good Morning America, Today, CNN, and many other nationwide outlets. She was the founding editor-in-chief of Yahoo! Parenting and the lifestyle editorial director there. Most recently, she was the vice president for lifestyle and entertainment at SiriusXM. Lindsay is a mother of two young children and the creator of the viral #NoShameParenting movement.